Indian Americans honor Rep. Keith Ellison as “Champion of Human Rights”
Event to mark India’s Republic Day held on first weekend after January 26th
FOR IMMEDIATE RELEASE
February 03, 2016
The Indian American Muslim Council (IAMC – www.iamc.com), an advocacy group dedicated to safeguarding India’s pluralist and tolerant ethos, honored Congressman Keith Ellision (D-MN) as a “Champion of Human Rights,” at an India Republic Day celebration held in Minneapolis. Although Republic Day is on January 26th, the celebrations were held over the weekend, to enable optimal participation from the community.
Among the speakers was Ms. Robin Phillips, of Advocates for Human Rights, a prominent organization that has done commendable work in highlighting issues related to human rights and religious freedom of minorities in India.
The highlight of the event was the “Champion of Human Rights,” award given to Congressman Keith Ellison, in recognition of his work to advance human rights, both in the United States and around the world. Mike Siebenaler, Constituents Services Director in Rep. Ellison’s office, accepted the award on behalf of the Congressman. 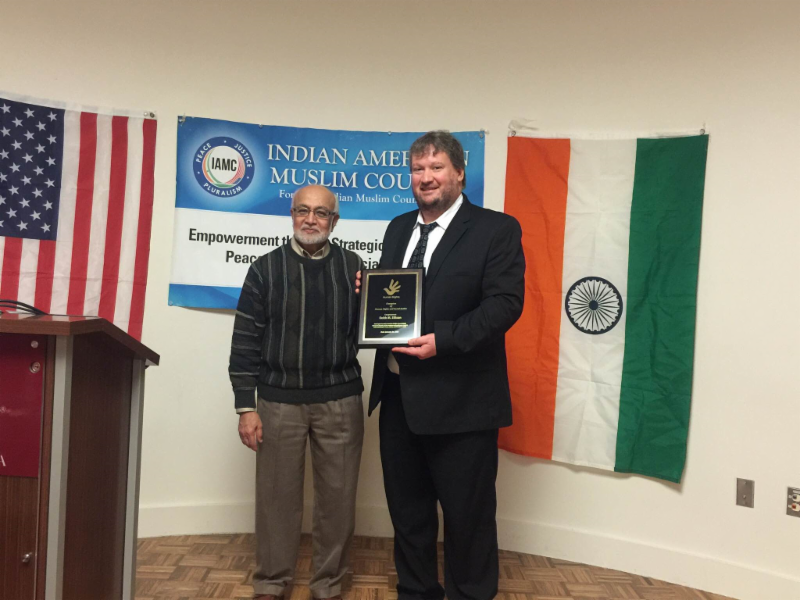 “Speaking out against the violations of human rights and civil liberties of minorities in India, is an obligation of entire Indian diaspora and not just the privilege of a few,” said Mr. Robin Phillips, Executive Director of Advocates for Human Rights. “AHR, whose mission is to promote civil society and to reinforce the rule of law, feels almost obligated to work with IAMC whose main goal is freedom, justice, and peace for all in India,” added Ms. Phillips.
Attendees and speakers noted the continued assault on minorities and lower castes. Delegates also expressed profound respect for Mr. Rohith Vemula, a Dalit research scholar who was driven to commit suicide as a result of the harassment and intimidation at the University of Hyderabad, in which even Union ministers were involved. Outrage over Mr. Vemula’s treatment and subsequent death has been expressed in the form of mass protests to erupt at major universities and cities across US and around the world.
“This year’s Republic Day celebrations are marked by a grim reminder that the struggle to uphold justice and equality before the law for all people, regardless of caste and creed, is now more urgent than ever,” said Mr. Umar Malick, President of IAMC.
Indian-American Muslim Council is the largest advocacy organization of Indian Muslims in the United States with chapters across the nation. For more information please visit our website at: http://www.iamc.com
0 CommentsClose Comments