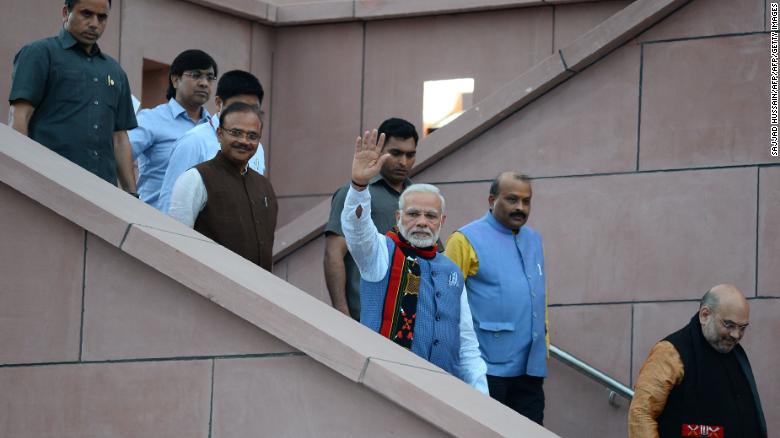 (CNN)The Indian government is shelving a rule to punish journalists for publishing “fake news” just 48 hours after its introduction.

The proposed order would have given the governmentthe authority to strip individuals and media organizations of their accreditation — which is needed to go to government functions and makes access to government offices easier — if they received a complaint of reporting so-called fake news, a term that was not specifically defined.
Prime Minister Narendra Modi’s government said the measure was meant to help stop the spread of misinformation throughout the country, but critics swiftly condemned it as an attack on free speech in the world’s most populous democracy.
“Make no mistake: (T)his is a breathtaking assault on mainstream media,” Shekhar Gupta, one of India’s most prominent journalists, tweeted to his nearly 2 million followers. He is the editor-in-chief of ThePrint, an Indian website focusing on politics and policy.

Make no mistake: this is a breathtaking assault on mainstream media. It’s a moment like Rajiv Gandhi’s anti-defamation bill. All media shd bury their differences and resist this. https://theprint.in/politics/govt-fake-news-cancel-accreditation-journalists/46622/ …

Govt to crack down on fake news, cancel journalists’ accreditation

Centre proposes six months’ suspension for a first violation, one year for a second violation and permanent cancellation for a third violation.

A spokesman for Modi’s office confirmed the Indian leader ordered the rule be pulled.
Smriti Irani, India’s minister of information and broadcasting, said Tuesday the now-removed order had generated debate and that media organizations could work with the government to fight what she called “the menace of ‘fake news.’ “

.@MIB_India is more than happy to engage with journalist body or organisation/s wanting to give suggestions so that together we can fight the menace of ‘fake news’ & uphold ethical journalism. Interested journalists and/or organisations may feel free to meet me at @MIB_India. 2/2

The measure’s introduction was troubling to some who saw it as the latest effort among powerful leaders of Asian democracies to target the free press under the guise of combating so-called fake news, a term popularized by President Donald Trump in his effort to fight negative press coverage.
Malaysia’s Upper House passed a bill criminalizing the spread of fake news this week, the first step in it becoming law. Singapore is also planning legislation to tackle online misinformation. Journalists in Myanmar and Cambodia — two countries the West has invested heavily in to ensure successful transitions to democracy — have been arrested in recent months.
And Philippine President Rodrigo Duterte has railed against the media by employing the term on a regular basis. His government has come under fire for reportedly targeting the online news site Rappler over its negative coverage of the Duterte administration’s bloody war on drugs. A presidential spokesman denied the allegations.
India appears to be following a similar path, said Prem Panicker, a prominent journalist who used to be Yahoo India’s managing editor
“There is a worldwide leaning toward hard-right governing style and hard-right leaders, and the corollary to that is that there’s increasing stresses on the press,” Panicker told CNN.
“The single biggest problem is that this is when you want a very free, very vibrant press.”
Despite the fierce criticism of New Delhi’s proposed rule, some of its opponents do believe there’s a need for either more regulation or greater responsibility on the part of publishers.
India has one of the world’s most saturated and fastest-growing media markets, boasting thousands of options in print, television and online journalism.
With that freedom and booming market has come a thriving tabloid culture, which has frustrated mainstream journalists who get lumped in with those peddling misinformation and flouting common standards.
Ahmed Patel, a senior leader of the opposition Indian National Congress political party, said that he appreciated the effort to combat “fake news” but voiced concerns that the proposed measure could be misused.

I appreciate the attempt to control fake news but few questions for my understanding:
1.What is guarantee that these rules will not be misused to harass honest reporters?
2.Who is going to decide what constitutes fake news ?
1/2

Others, such as Gupta at ThePrint, said India’s respected outlets have not done enough to stymie the growth of increasingly sensationalist tendencies in the press.
“By dumbing down news, converting ‘debates’ into circuses, and using loaded hashtags, the media has allowed the social contract guaranteeing its freedoms to fray,” Gupta wrote in an opinion piece.

CNN’s Marc Lourdes and Euan McKirdy contributed to this report.