A massive protest took place in Kanpur against the newly enacted Citizenship Amendment Act (CAA) and agitators set buses, even police posts on fire. Amid the ongoing protests, Zeenat and Hasnain’s wedding took place on the morning of December 21.

Hasnain was worried about how he’s going to get the baraat to the curfew-hit area. He was anxious as hours earlier, two youths had died in the anti-CAA protests in the vicinity and police and paramilitary had taken control of the area, which made the situation worse.

After having a conversation with Hasnain, Zeenat’s uncle turned to the family and asked if the wedding day should be postponed. As word spread, their neighbour Vimal Chapadiya assured them that nothing will happen and they should continue with the festivities. 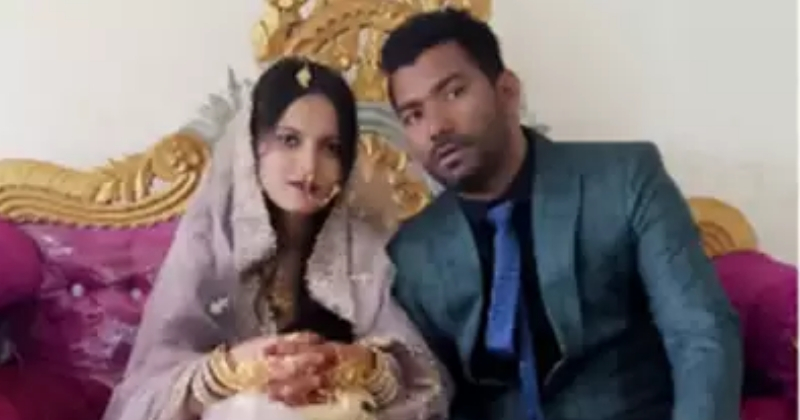 Zeenat and Hasnain – Times Of India

“Don’t worry,” Chapadiya told Hasnain. “We will escort the baraat the entire time to ensure their safety.”

In the evening, when 70 people in the baraat arrived at Bakarganj Chauraha in cars and a mini-bus, they were escorted by 50 Hindus led by Chapadia, who formed a human chain around them. They escorted them till the wedding venue which was a kilometer away.

“Vimal and his friends ensured that the baraat was fine. They even stayed back until the bidai (departure of the bride),” Fazal told the Times Of India on Wednesday as Zeenat, who had returned to pay her family a visit, smiled. The first thing she did when she returned back to her house was looking for ‘Vimal Bhaiya’ and thanked him.

“I didn’t get a wink of sleep in the days leading up to my marriage,” said Zeenat, who lost her father when she was 12. “A wedding scheduled in the area had been cancelled as the groom’s family refused to come since the situation was so tense. That morning, when my uncle received the call, I had given up all hope that my wedding would take place. Without Vimal bhaiya’s intervention, the baraat would not have reached here. He came like a farishta (angel) in my life.”

Chapadia said that he did what he thought was right. “I have seen Zeenat grow up. She is like my younger sister. How could I let her heart be broken? We are neighbours and I had to stand with the family in times of distress,” he said.

No religion preaches hatred or disrespect, and incidents like this one prove exactly that. There might be a lot of hate in the world, but there’s also a whole lot of love.